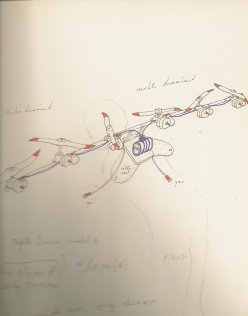 A long time ago the works of the inimitable Panamarenko — artist, engineer, poet, physicist, inventor and visionary — grabbed me. Panamarenko has dedicated his life to the force of gravity, or rather to beating that force, to flight and speed, to movement and energy, to spaceships, aircrafts and submarines.
From the moment I came across his work I was awed by how his amazing mind works, mesmerized by his pencil drawings, lightly colored and with scribbled calculations all over them, and intrigued by his installations. One of his projects drew my special attention, the one where he crosses my love for myth with my love for science: the Icarus Project.

We all know about Icarus and about how he boldly ignored his father Daedalus’ instructions, how he flew too close to the sun, melting the wax of his wings, and how he fell to his death. Pepto Bismo is one of Panamarenko’s attempts to improve Daedalus’ wax-and-feather work. Of all Panamarenko’s characters and projects, Pepto Bismo stuck to me like an alter ego and I knew that sooner or later this friendly science fellow would show up in my scribblings.

And so he did.

The deuteragonist in You’re Not Icarus has the same fascination for Panamarenko as I have. Like me he is a science guy — well, I’m actually a science girl, but let’s not fuss about details. Like me he’s curious if Panamarenko’s formulas and calculations add up. In the book he is dubbed Pepto Bismo. I won’t divulge his real name, yet, I’ll leave that to you for once the book is out, but to satisfy a little bit of your curiosity you can take a peek at Pepto Bismo at the St. Jansplein in Antwerp or in Panamarenko’s fabulous book Tekenen en rekenen (Drawing and Counting), if you can get hold of it.