When Night Falls in Tenderloin

My apartment is in the Tenderloin district of San Francisco. And Tenderloin is, as a friend said, a bit dodgy. If I walk home from the library, I don’t even have to look around to know that I’m nearing my block: the air changes from a light kale-and-goat’s-cheese infused richesse to the dense odor of human waste that heralds the vast number of homeless that scurry around. It’s an odor that seems to envelop you, that tries to cling to your skin.

Does that scare me?

During daytime, I’m fine. The homeless are fairly harmless and we slowly get to know each other. I pass by small gatherings of men and women hanging around a former hotel, now a shelter-like facility for the homeless, where they wheel out a dead guy every other day. I zigzag between people passing the day lying on the sidewalk. There’s an old couple with cracked leather faces that walks a perpetual circulation of the block, hand in hand, looking at each other lovingly every few steps. The tall and lean guy in his fifties, fiercely guarding his belongings, which he tied to a lamp post with bright blue clothesline. Younger, bolder guys pissing in the garbage can on the corner of my street. I don’t mind. They leave me in peace. I leave them in peace.

It’s when the night falls that I get uncomfortable and stay up in my studio in the crown of my building. As traffic dies down, human voices take over. I sit and listen to the fiery screams of those who still have spirit left to fight, to the giggles of those on their way to a high, the cocky banter of those who have found and shared a bottle to forget.

But what unsettles me most are the lost cries of those who see their windmills loom up in the orange glow of the street lights, the despondent wails of those who have their demons leap at them from the shadows of their lives. Cries that go on all night and that gnaw at my heart. That’s when I cry too.

I cry because I know that the ordeal I put my protagonist through is a fantasy and not real life. I cry because I know that I am privileged and can walk away in a few weeks to more serene surroundings. I cry because I come from a country where we – still – have the solidarity to uphold a tax scheme that allows for a healthy safety net for those who need it and I challenge everyone opposing the high Dutch taxes to spend a week on this block and experience the flip side of cutting such safety nets. 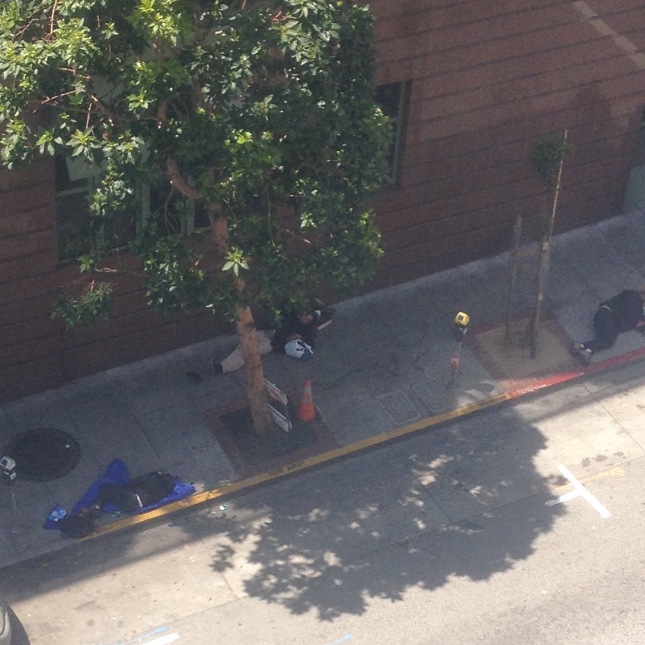